1Rebel, a new chain of gyms in London, brands itself as the "anti-gym". It is revolutionising London’s fitness and will be looking to extend this successful brand globally. It is a no-contract ‘pay-as-you-train’ boutiques, infamously ditching the typical stereotype gymnasium model.

1Rebel is taking fitness one step ahead of its competitors by using the #PowerOfMusic to differentiate and add value to its services. Music is the focal point at 1Rebel gymnasiums with curated bespoke playlists and even live music to inspire and motivate fitness enthusiasts.

1Rebel does away with the traditional treadmills and bench presses, but instead opts for studio classes offering spin, cardio, weights, and boxing. 1Rebel reinvents these classes  as “ride, reshape and rumble”, where workouts are accompanied by loud heart thumping music to tantalise the spirit and enable fitness members to reach euphoric heights. “It’s quite hard to reinvent the press-up,” Balfour admits. “But the way we service our customers can change.” And this is exactly what this gymnasium is doing. It is raising the bar by doing things a lot differently than other gyms, transforming this place of business by not locking in patrons with contracts but rather, invites fitness enthusiasts to a fun and exciting workout classes using music. Standard gym subscriptions are not available at 1Rebel but it, offers customers instead a pay-as-you-go model. “This means we have to be best-in-class every class to make you come back,” says Balfour.

1Rebel resembles more a nightclub than a gymnasium with live music from percussionists and saxophonists in certain classes to curated playlists from acclaimed renowned Djs. This gym is not for the faint hearted - it’s there to make you sweat, raise a pulse and enjoy doing it at the same time with orchestrated sound, this gymnasium is using music to boost customer engagement.

The emphasis on music, lights and dancing is ultimately to raise the euphoric spirits of fitness goers, turning workout into an exhilirating activity instead of a mundane chore.

Music is a powerful workout companion for athletes

Music influences mood and behaviour, and can therefore make performing in sports a lot more enjoyable. Music which is enjoyed by many athletes can be considered as important as their personal trainers, and has been scientifically proven to enhance performance. Music is proven to have a positive effect in mood, emotion, attitudes, cognition and behaviour. Many famous athletes, such as American swimmer Michael Phelps, who shared in a Today show interview that he listened to hip-hop music just before his races at the 2007 FINA World Championships where he set 5 world records. Later, he went on to win 7 gold medals at the following olympics. He set his motivation prior to the competition by chanting rapper Lil’ Wayne’s lyrics: “Yes, I’m the best, and no I ain’t positive, I’m definite I know the game like I’m reffing it”. 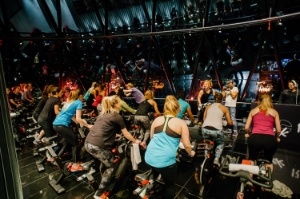 Music which is transmitted through a person's brain can in fact make you swim even faster. The results of a study which was published in the Journal of Strength and Conditioning Research shows when swimmers listened to the SwiMP3 (an underwater mp3 player for swimmers), their average 50m swim times improved by .32 seconds. In addition, when listening to the SwiMP3, their 800m swim times improved by 6.5 seconds on average. Additionally, all participants ranked their swimming experience with the SwiMP3 higher on PACES than swimming without it.

Yoga performed to the beats of music legends, like Jay Z and Tupac, can increase work rate and build stamina through the psychological effects associated with tempos and rhythm. The idea of doing yoga to music was started in LA by Steve Ross, a former guitarist with Fleetwood Mac. Hip-hop yoga officially landed in Australia in 2014 when a student of Ross’ opened Yoga 213 studios in Melbourne and Sydney. In an interview for Yoga Journal, Steve Ross was asked if music helps in Yoga and his response was, “My approach at Malibu Yoga in the mid-’80s was to use modern music. Purists who thought that was not traditional criticized me. But if you’re traditional, you don’t use props, your diet is restricted, you don’t have sex, and you only teach private sessions. What’s traditional? I started playing music to make it more fun. Why impose misery when it can be so happy? Adding music brings yoga to a different emotional level. I just want to inspire people to be happy. So that’s what I do. And I love it.”

1Rebel currently has two gyms in the City of London, and is fundraising on Crowdcube, a crowdfunding platform, for £1.5m. However, the campaign is overfunded by 100pc, securing £3m for 26.08pc equity and making it the fastest brand to hit £3m in 22 days. 1Rebel is looking to open two further sites next year - in central and west London – and wants to reach 10 sites in the capital by 2019. Being innovative and standing out from other fitness centers, this anti-gym is creating the right mood and giving fitness enthusiasts an authentic experience by integrating music in its  strategy. We see this fitness company successfully building its brand identity through sound.

Music should not be taken as an after-thought in building brands in the sport industry.  With the right strategy in place, music can be a key differentiator to increase customer engagement and beat out competitors. It should be considered in any content planning in order to benefit the brand and ultimately, your consumers will re-pay you back in loyalty. After all, the most passionate fans in the universe are music fans.